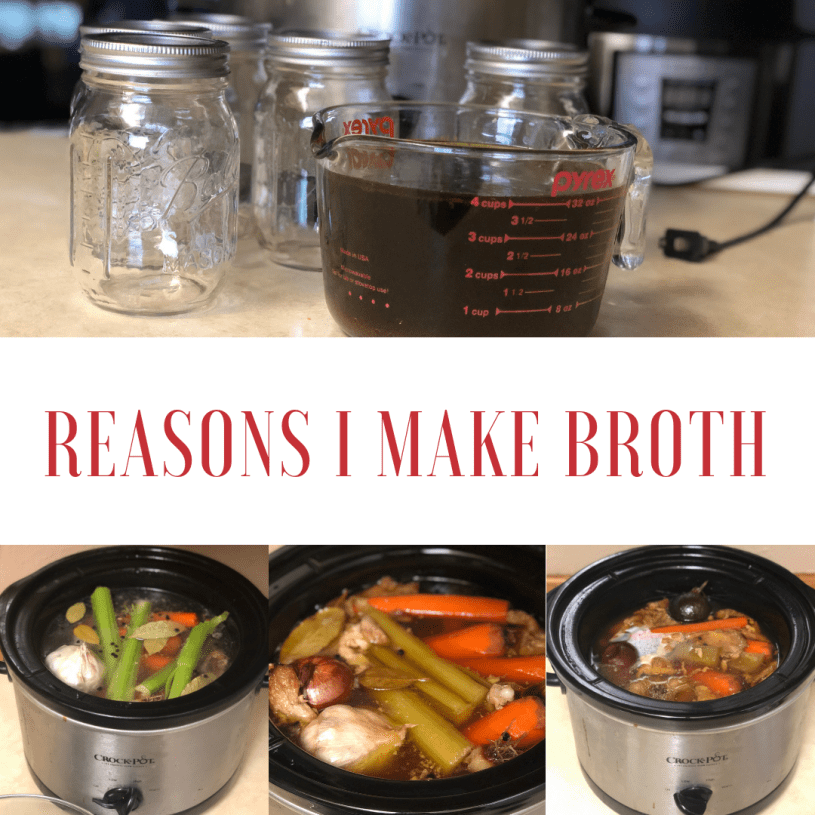 What reasons are there to make bone broth? Recently, I’ve been asked by an Instagram Follower “I’m just wondering if there is a reason you make bone broth?” It got me thinking…. “Why do I do it?” So instead of writing a super long comment in response to her question, might as well make it a blog post.

My husband and I like the the taste of the chicken and beef broth more when I make the stock than when we buy it from the grocery store. There’s an extra richness to it, I think, since it’s being made totally from scratch and I’m pulling out every bit of richness from the bones as possible. And then overall, my recipes taste better. I just add salt, pepper, veggies and water, and of course, the bones. Turn the crockpot on and go about my day(s).

Here are my broth recipes-

The box of broths don’t last long in our fridge- and that’s not from using it up too fast. The box’s spoil quickly and for some recipes, the cans are too much. When I make my own broth, I divide it amongst multiple mason jars and most go into the freezer. When I need more broth, I just defrost it. And nothing ever goes to waste.

(which is how I see my weekends of making broth). I feel very accomplished after going through the many hours of preparing the food, the crockpot, my “station”, dumping the broth into the strainer, and later pouring everything into mason jars. And then AGAIN when I taste it in my cooking.

Back in 2015, when I was first diagnosed with epilepsy, I needed to be on the Keto Diet for a short while and I learned about making bone broths.

Ever since I was a girl, beef broth is one of the first few things that I can eat/drink after one of my more difficult seizures. I don’t have an appetite and water seems awful to me. But a warm cup of beef broth is inviting and eases my queasiness, shakiness, and nausea from having just had a seizure.

So I figured, “Why not try making my own broth?” And so I did, and I loved it way more than buying it at the store.

Nothing is wrong with buying broths at the store- I’ve done that plenty of times between when I first learned about making broth and these past couple weeks. For two years, I lived in Bozeman while I finished up my undergrad and there was no room in our tiny apartment or my schedule to make homemade broth. But now that I’m not totally consumed by college work, I’ve been able to make weekend kitchen projects for myself.

Last night I tried chicken and dumplings and I didn’t have chicken broth for it. The recipe was made from a rotisserie chicken, so it was perfect timing. I took the chicken apart and put the meat into multiple glass Tupperwares for soups and salads, etc. and I set to making broth!

Combating Acne with these Products

Make Your Own Candles!

I’m a blogger, dog-mom, and freelance writer. This blog is about making your diet and lifestyle affordable with travel tips, meal planing resources and recipes for tight budgets and /or low carb diets.